3. Watch video : ‘How to Celebrate Rakshabandhan? ‘

4. Actions to be performed while tying rakhi

5. Prayer to be made while tying Rakhi

7. Importance of tying the rakhi without expectations

8. How should a sister’s bhav (Spiritual emotion) be while tying a rakhi ?

Rakshabandhan is the festival of rakhi. This is a festival to celebrate the bond between a brother and sister. It is celebrated on Shravan Pournima.

A. Goddess Lakshmi made King Bali (from hell) her brother, by tying a rakhi (A band tied around the wrist by a sister to her brother, signifying a sacred relationship between the two) on his wrist and thus freed Narayan (Her husband). This was the day of Shravan Pournima.

B. As stated in the Bhavishya-Puran, Rakshabandhan was originally meant for Kings. A new custom of tying rakhis began from the historical ages.

The sister is supposed to tie a rakhi on her brother’s wrist. The emotion in this is that the brother should become prosperous and he should protect his sister. More important than a sister tying a rakhi to her brother, is a young man getting a rakhi tied from a young woman. By doing so, the attitude of men towards women changes.

3. Actions to be performed while tying rakhi

A. A short wooden seat is placed for the brother to sit on.

B. A rangoli design is drawn around this wooden seat (Sattvik waves are emitted by the rangoli designs made in this way and they help in making the environment of the place sattvik.)

D. The sister applies tilak of vermillion to the brother.

E. She then ties the rakhi on her brother’s right wrist.

F. A wristband is made with a small bundle of rice grains, gold and white mustard seeds tied together. This is known as a raksha or a rakhi.

G. After tying the rakhi, the sister waves a ghee lamp i.e. Arati (in a semi-circular manner) in front of the brother.

H. After waving the Arati, the brother gifts his sister something. The sister shows her respect for her brother by accepting the gift.

4. Prayer to be made while tying Rakhi

Meaning : I will tie the raksha that bound the all-powerful and generous King Bali, to bind you too. O raksha, do not get dislocated.

Appropriate prayer by the brother on Rakshabandhan day

A sister should pray for her brother’s prosperity and a brother for his sister’s protection. They should both pray to God that, ‘Let there be efforts from both of us for the protection of Nation and Dharma’.

5. Importance of a sattvik gift of Rakshabandhan 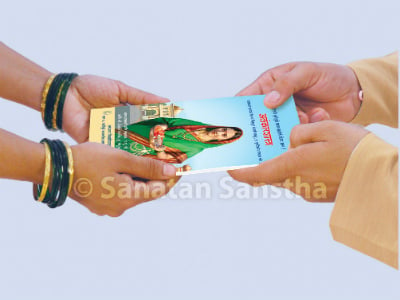 Importance of giving a sattvik gift

Non-sattvik gifts are Raja-Tama-predominant. That is why, a brother should gift something sattvik to his sister. Through a sattvik gift like a Holy text or japamala, which will augment the sister’s spiritual practice, the following benefits are obtained :

A. Sattvik items do not affect the person at the worldly level.

B. The person who gifts something sattvik benefits to the extent of 20% and the person receiving the gift benefits by 18%. Through a sattvik action, the give-and-take account reduces and new account is not created.

The noteworthy point here is that the sister should tie the rakhi without any expectation of a gift.

6. Importance of tying the rakhi without expectations

7. How should a sister’s bhav (Spiritual emotion) be while tying a rakhi ? 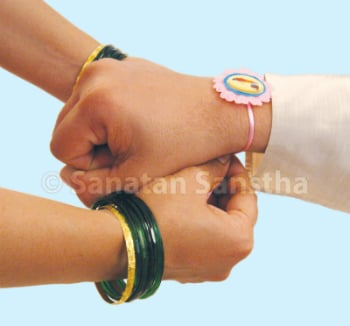 Once, Shrikrushna’s finger was injured and blood flowed from it. He went to Draupadi. Without much thought she tore a piece of the pallu of an expensive zari sari she was wearing and tied it to His finger. On Rakshabandhan day, every sister should have bhav like Draupadi’s.

Nowadays, rakhis are decorated with ‘Om’ or pictures of Deities. After use, these rakhis are discarded. Such rakhis end up in the rubbish or in places where they will get trampled upon; this amounts to denigration of the respective Deity. We incur sin for this. Hence, immerse rakhis in flowing water. Do practice this and educate others too.