3. Only Bhagawan Shrikrushna can protect
Hindu women who are in a similar state as Droupadi 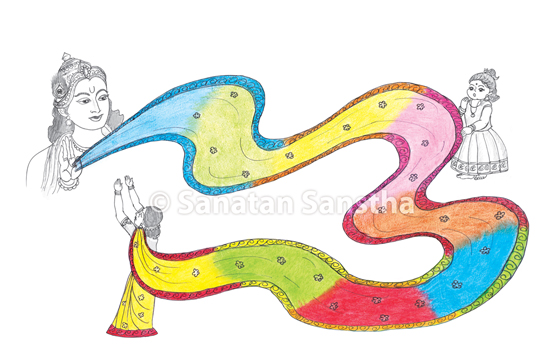 ‘Tomorrow I am leaving for Bharat. While in USA, H.H. Dr Athavale (Sanatan’s source of inspiration) inspired me to draw pictures depicting balakbhav and awakened my bhav (spiritual emotion) and kept me in a state of Anand. He constantly provided me satsang (Company of the God principle) and satseva. Hence, I express my gratitude unto His Holy feet. He cared for me as a doting mother would. He kept me in a state of bhav as if I am in Ramnathi Ashram. In fact, I could see a hillock with greenery from my window in the same way as I would there.

3 A. Circumstances that led to drawing the picture

3 B. Implied meaning of the picture

In this picture depicting balakbhav, Bhagawan Shrikrushna is shown coming to protect and save the Hindu women (who are in a state of surrender bhav just like Droupadi) from adversity. Bhagawan Shrikrushna is providing a ceaseless flow of sattvik saris that has various colours. I was inspired to draw this picture from the Holy text ‘How should the clothes be from a spiritual perspective.’

3 C. Special features of the picture

There are two Marathi verses whose meaning is given here – ‘But for Shrikrushna, we have no support. The entire world is devoid of support. He and only He is the saviour of women. When a cruel eagle mauled a sparrow with its beak, Shrivishnu came on Garuḍ to protect it.’

‘God’s assurance that, “I will ensure the safety and well being of the devotee who surrenders unto me” is proved by the miracle performed by Shrikrushna when Droupadi was being disrobed.’ (Divine Knowledge received through the medium of Ms Madhura Bhosale, 18.7.2013, 10.50 p.m.) 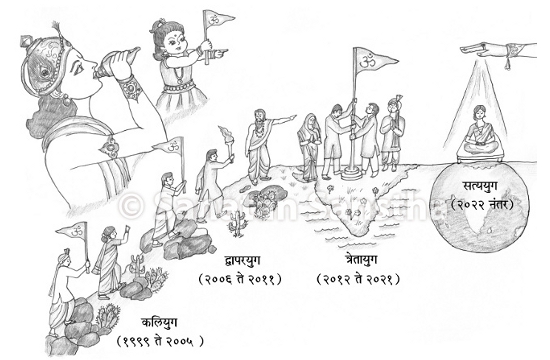 ‘The chronological order of the eras is from Satyayug to Kaliyug. There is a gradual deterioratition in the eras in this manner – from Satyayug to Tretayug, Tretayug to Dwaparyug, Dwaparyug to Kaliyug. In the present period of transition, there will be a direct leap from Kaliyug to Satyayug within the Kaliyug. On the front page of Sanatan Almanac of 2012 as well as 2013, the transition from Kaliyug to Satyayug within Kaliyug has been shown.

4 A. Explanation of the picture

I read the articles on SSRF’s website titled ‘Armageddon’ (World War III) and ‘Battle of Good versus Evil’ (War between Righteousness and unrighteousness). The subtle-picture of this transition based on the subtle-knowledge obtained by Sanatan’s lady-seeker H.H. (Mrs.) Anjali Gadgil is also placed on this website. After seeing the picture, I got the idea of writing some aspects about the transition from Kaliyug to Satyayug in the form of a table.

1. Aspects about the transition from Kaliyug to Satyayug

4 B. Special features of the picture

‘When the words of Knowledge come into contact with devotion, the dryness of mature thoughts vanishes and they acquire mellowness of love. This is like milk, which acquires the sweetness of nectar when sugar is added to it. Likewise, upon attaining mellowness of love, the journey of sadhana (spiritual practice) ends; God manifests within and ascends the throne of the heart. This marks the commencement of Ramrajya (Divine Kingdom). The jiva (embodied soul) gets sayujyamukti (Liberation from the bondage of birth and death) and its journey to the ultimate Truth, that is, Moksha (Final Liberation) commences at a brisk pace. The journey from Mukti to Moksha amounts to establishment of the Ramrajya in Tretayugand commencement of the golden era in Ramrajya, that is, Satyayug.