The festival of Holi is celebrated for two to five days depending on the regional variations. It has various names such as Hori, Dolyatra in North Bharat; Shimga, Holi, Hutashani Mahotsav and Holikadahan (Burning of Holika) in Goa and Maharashtra, and Kamdahan (Burning of desires) in South Bharat.

This festival is also called Vasantotsav or Vasantagamanotsav the festival to welcome the Vasant (Spring) season. 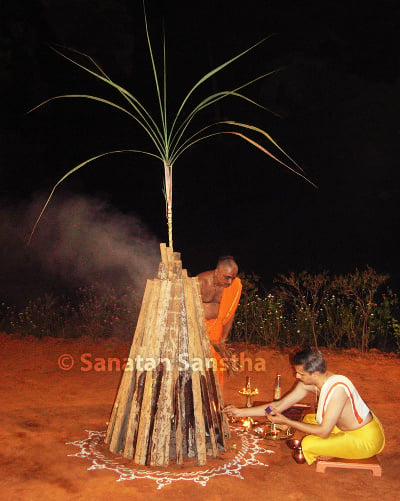 Method of celebration of Holi

1. Tithi of the festival

Phalgun Pournima (Full moon day of Hindu lunar month of Phalgun) to Krushna paksha Panchami (Fifth day of dark fortnight of Phalgun). This festival is celebrated for two to five days depending on the regional variations.

A. Once upon a time a female demon named Dhundha or Dhoundha entered a village and harassed children. She generated diseases. To protect children from the demoness and to flee her away, Narad muni advised Samrat Yuddhishtir to perform ‘Holika’.

B. In North Bharat, an effigy of the demoness Putna is made and burnt on the night of Holi. Three days before Holi, Bal-Krushna is kept in a cradle and His festival is celebrated. On the full moon night of Phalgun, an effigy of Putna is burnt.

C. Once, Deity Shiva was engrossed in penance and was in a state of meditation. At that time, Madan (also known as Kamdev, a God instrumental in generating desire) entered His mind. Shiva then opened His eyes to see who was distracting Him and in one glance burnt Madan to ashes. The people of South Bharat celebrate this festival signifying the burning of Kamdev (Deity of Desire). On this day, an effigy of Madan is made and burnt. Holi has the ability to win over Madan; hence the festival of Holi.

Seeing the form of the Holi as prevalent today, one realises that this festival is basically celebrated at the social level. Though with passage of time, a number of religious and cultural rituals have been included in it, yet the social form of this festival has remained intact. Holikotsav, Dhulikotsav and Rangotsav are the three festivals that stand out. Holi, Dhulvad and Rangapanchami are their popular names.

Holi is a festival that guides us on the path of embracing sattvik nature by elimination of evil character and bad thoughts in ones mind. The aim is to purify the environment by offering oblation in form of dry wood to the fire.

A. Location and time

The Holi has to be lit in front of a temple or at an appropriate place on the evening of Pournima. Generally, this is done in front of the Gramdevta (Village Deity, the protector of residents of that village).

The place where puja (Ritualistic worship) of Deity Holika is to be performed is first purified by applying cow dung on the ground. Rangoli is drawn to decorate the place of worship.

In the centre, there is minimal dry wood and around it dry cow dung cakes are arranged. After a bath and recital of the deshkal (Place and time), the person performing the ritual should first make the following resolve – “To get relief from the trouble caused by Dhundha, my family members and I worship Holika.” Next, the puja is performed by offering gandha (sandalwood paste) and flowers, followed by offering of Naivedya . After this, reciting the mantra prescribed by the scriptures and saying ‘|| Holikayai Namaha ||’, the fire should be lit and circumambulated. After the fire is completely burnt, it should be pacified by sprinkling milk and ghee. Fruits like coconut, grapefruit should be distributed to people assembled there. Attendees should pray to the Deity Holika for obtaining Her blessings and energy for performing activities towards nation building and protection of Hindu Dharma.

The next day at dawn, after paying obeisance to the ash of the Holi, it should be applied to the body and then one should bathe. This prevents aadhi-vyadhi (mental suffering and diseases). In the morning, the ash of the Holi should be immersed in flowing water followed by a prayer to Holi.

Today, organisations like Andhashraddha Nirmoolan Samiti (ANiS) and secular politicians under the pretext of decreasing deforestation are spreading a wrong message of lighting a Holi with garbage. Lighting a Holi of garbage will only pollute the environment. On the other hand, celebrating Holi with a bhav (Spiritual emotion) of worship towards Deity Holika makes the atmosphere sattva predominant.

Dhulivandan is celebrated on Phalgun Krushna paksha Pratipada. On this day either ash or dust of Holi is worshipped. After puja, a prayer is offered by reciting the following mantra.

Meaning: O Devi Lakshmi, You are adored, worshipped by Brahma, Vishnu and Mahesh; and that is why O Goddess of prosperity, be an endower of prosperity to us and protect us.

Shri Vishnu performed Dhulivandan at the beginning of Tretayuga. The implied meaning is, Lord Vishnu began His ‘work’ through the Incarnation of various radiant colours. Rangapanchami, played without Dhulivandan signifies the leela (Divine play) of the Incarnation, which is manifest in the forms of various colours. Dhulivandan is the worship of the destroyer form of the Deities. – H.H. (Mrs.) Anjali Gadgil

8. Curbing malpractices during Holi
and Rangapanchami is our religious duty!

There are a lot of malpractices taking place under the pretext of celebrating Holi today. One should not cut blooming trees for obtaining wood for lighting in the fire or steal wood and cow dung cakes. One should not forcefully collect money from the public for celebrating Holi. Similarly, on the day of Rangpanchami, people indulge in malpractices such as eve teasing, throwing dirty water balloons, applying dangerous dyes to the body, playing loud obscene music, gambling, drinking alcohol etc. These malpractices harm Dharma, and hence, putting an end to them is our religious duty. Spread this word in the society and even after doing so, if you come across such incidents, lodge complaints with the Police. Sanatan Sanstha conducts public awareness campaigns in this regard.