1. Tithi (Lunar day) of the festival

Watch videos on ‘How to celebrate Gudipadwa ?’

2. Why is it ideal to commence
New Year on Chaitra Shukla Pratipada? 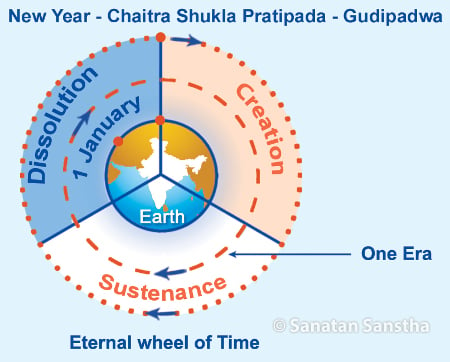 There are several ways of commencing a new year – in the Christian calendar 1st January marks the beginning of the year, the financial year in Bharat begins from 1st April, the Hindu new year from Chaitra Shukla Pratipada, the commercial year from the first day of the Hindu lunar month of Kartik, the solar year, the lunar year, the lunisolar year and so on. Irrespective of the day of commencement, the year comprises of twelve months. Who first proclaimed that a year should consist of twelve months and how did the world come to accept it? The Vedas (The most sacred Hindu scriptures.) are the foremost in promoting this concept. There is no difference of opinion that Vedas are the most ancient of literary texts. The Vedas say ‘द्वादशमासैः संवत्सरः ।’, meaning ‘a year consists of twelve months’. It is because the Vedas say so that the world has accepted it. Of all the days mentioned above, the most ideal is that of Chaitra Shukla Pratipada. There is no explanation as to why 1st of January is the beginning of the New Year. Someone decided this, and it began. Contrary to this there are natural, historical and spiritual reasons to mark the commencement of the year on Chaitra Shukla Pratipada.

Towards the first day of the month of Chaitra (Padwa), the sun assumes a position above the Vasant intersection (the point of intersection of the Equator and the Meridians) and the spring season commences. In Srimadbhagvadgita (10.35) Shrikrushna says, “Amongst the seasons the exhilarating Vasant rutu (spring) is my manifestation.” In this season, the weather is pleasant and exhilarating. In the Shishir rutu (autumn) the trees shed their leaves. Towards Padwa, trees bear new foliage and appear fresh.

1. On this day, Shriram killed Vali.
2. The Shakas too gained victory by defeating the Huns.
3. This day also commemorates the commencement of the ‘Shalivahan shak’; for, on this day King Shalivahan vanquished his enemies.

Creation of the Universe

Deity Brahma created the Universe on this day, that marked the beginning of Satyayug (the first in the cycle of four eras since the origin of the Universe); hence, the commencement of the New Year on this day.

Not 1st January, but Gudipadwa is truly the New Year day

The cycle of the year that begins with Gudipadwa is related to the time that the Universe was first created and therefore the nature is vibrant with life. On the contrary, the year beginning from the midnight of 31st December is related to the period of destruction. The New Year beginning on the day of Gudipadwa can be compared to a radiant day brought by a new sunrise.

The New Year after 31st December is like the night which follows a sunset, filled with the tama component. Man benefits by following the rules of nature and is actually harmed by going against it. Hence, it is beneficial to celebrate the New Year on Gudipadwa, rather than 31st December night as per western culture. (Divine knowledge received by Sanatan’s seekers by the grace of God.)

One among the three and a half muhurts (Auspicious time)

Gudipadwa, Akshay Trutiya and Dussehra (Vijayadashmi) each make up one, and the first day of the Hindu lunar month of Kartik comprises one-half of the total three and a half muhurts. The special feature of these three and a half muhurts is that unlike other days, when one has to choose an auspicious moment to perform a ritual, on these days one does not need to, as every moment of these days is auspicious.

Vedas
The most sacred Hindu scriptures, revealed directly by God
Tithi
A lunar day
Tama
One of the three components in the Universe denoting inertia and ignorance
Satyayug
The first in the cycle of four eras since the origin of the Universe
Pratipada
First day in the bright fortnight of the moon