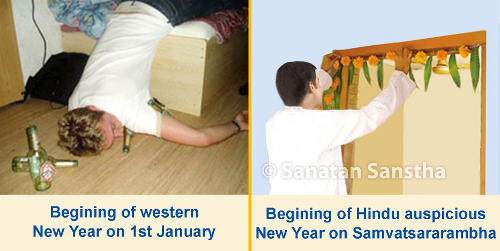 1. When should New Year be celebrated ?

Now a days 31st December is celebrated as New Year, on a very large scale all over the world. These days it is a trend to have parties, fireworks, drinks, eating and enjoying on the eve of New Year.

However, the actual New Year varies throughout the world. 1st January was considered ‘first day of the year’ as per the Roman Julian Calendar.

Welcoming the New Year on 1st January according to the western culture (with song and dance, eating-drinking, indulging in materialistic pleasures on 31st December night), which does not have any spiritual basis, amounts to ‘conversion’ of Hindus for a day !

Our new year is Chaitra Shukla Pratipada. It is the day on which the Universe was created; hence, this is the real commencement of the New Year.

2. To stop this promotion of the materialistic western culture,
to save our future generations from irreversible degeneration
and to avoid causing harm to our own Dharma and culture

1. Remember that Divine waves and God’s blessings come to the earth in greater proportion on Chaitra Shukla Pratipada.

2. To get maximum benefit of God’s blessings, wish Hindus and others on Chaitra Shukla Pratipada by sending them greeting cards (by mail, E-mail), SMS etc. and telephonically !