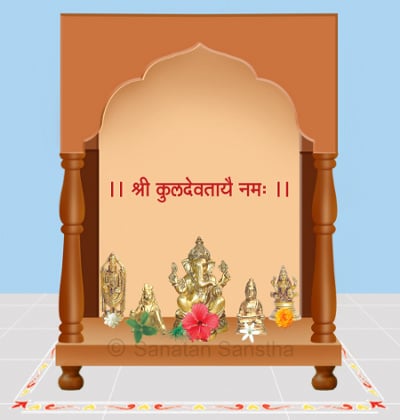 1. What should be the direction of the temple at home ?

The temple at home should always be in the east-west direction.

2. What should be the features of the temple at home ?

2 A. What material should the temple at home be made of ?

As far as possible, the temple at home should be made of sandalwood or teakwood. Sandalwood is expensive and may not be viable for the average individual. Comparatively, teakwood is cheaper and has better ability to retain and emit sattvik (Sattva-predominant) waves. Eventually it is the bhav towards God that attracts the Divine waves to the top of the temple, which are further dispersed in the house as per the requirement.

2 B. What should be the colour of the temple at home ?

Though the modern trend is to paint the temple at home with different colours in the name of decoration, it is ideal to retain the original colour of wood, that is, pale brown. Since a simple religious act like worship of a Deity amounts to spiritual practice, it helps the individual in traversing from the state of sagun to nirgun, meaning, from duality to non-duality.

The temple at home is made with the intention that the worshipper gets maximum Chaitanya from the worship of the Deities.

The level of bhakti and bhav in individuals with spiritual level above 50% is high and hence, the amount of Chaitanya generated as a result of their worship of the Deity is also high.

Above the spiritual level of 60%, the progress of the seeker is towards introversion. Idol worship, representative of the sagun form of bhakti in a way, makes the seeker extrovert. Hence, a seeker who finds solace in being an introvert, is lesser inclined to make a temple at home. (It is acceptable to have a temple at home if it is the wish of other family members.)

3. How should the Deities be arranged in a temple at home ? 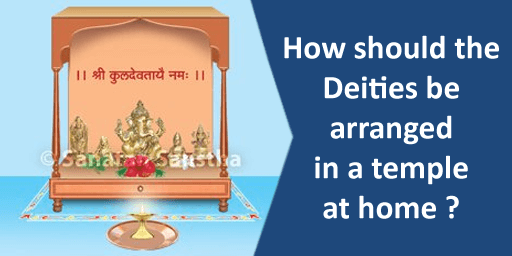 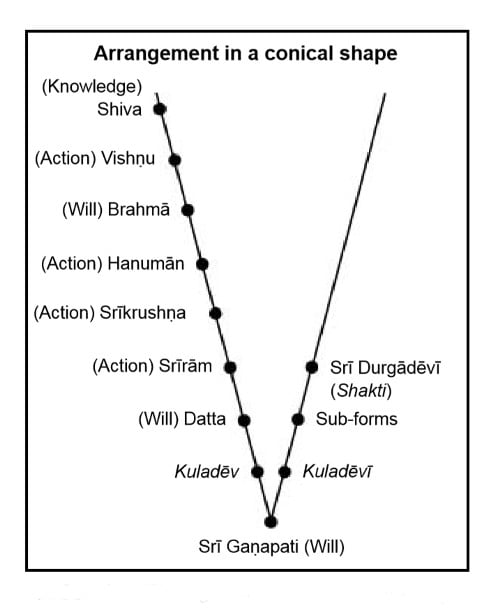 ‘Arrange the Deities in a conical shape. In front of the devotee performing the puja at the tip of the cone, that is, at the centre, place Shri Ganesh. To the right of the devotee place the female Deities beginning with the family Deity, followed by sub-forms of superior Deities and then other female Deities. To the left of the devotee place the male Deities in the same sequence. Shri Ganesh, Kuladevi and Kuladev are sufficient, because this helps the individual awaken bhav faster than for other Deities. Our sojourn should be from Idol worship to the various sagun and nirgun Principles of the respective Deities, and from there on to God who, although completely linked with the nirgun, encompasses all these Principles.’

Those who are already blessed with a Guru and live alone should place only the Guru’s photograph in the temple at home. As per the quote ‘गुरुब्र्रह्मा गुरुर्विष्णुर्गुरुर्देवो महेश्वरः ।’, for the disciple the Guru is everything. In such cases act accordingly.

Reference : Sanatan’s Holy Text ‘Temple at home and implements used in the worship of God ‘

2 thoughts on “How should the Deities be arranged in a temple at home ?”