Let us learn about the spiritual significance of cobras and importance of worship of cobras on the Nagpanchami day. 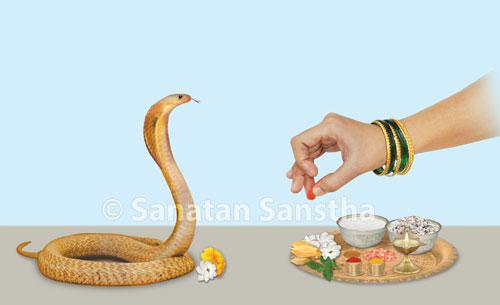 All cobras have originated from Sages Kashyap and Kadru.

There are three types of cobras !

They are predominantly black in colour and reside in Naglok in Patal (Hell). Superior negative energies use them in subtle wars to poison the enemy. These cobras are million times powerful and thousand times poisonous than cobras on the earth.

These cobras live on the earth. As they are born in the species of cobra their behaviour resembles the average cobra. They are black, bluish, auburn, brown etc. in colour.

These being Divine they reside in Naglok near Shivalok. They are yellowish in colour with a red or blue nagmani on the hood. They are million times powerful than those from Patal and are adorned by different Deities. Vasuki resides on the neck of Deity Shiva. The one serving as a waistband for Deity Ganapati representing the active universal spiritual energy (kundalini) which is yellow in colour is Padmanabh. Shrivishnu reclines on Sheshnag. Sattvik cobras are within the control of the evolved and Sages and obey their orders. As yellow cobras are worshipers of Superior Deities they possess Divine strength and hence the power to bless, that is function as per resolve.

Deceased ancestors trapped in the nether region and pitrulok (region of ancestors) mostly appear before their descendants in the form of black cobras. Sattvik ancestors however appear as yellow cobras and bestow blessings. Ancestors having intense attachment for the home, wealth and family take rebirth on the earth as cobras. Those ancestors who torment others and amass wealth by following Vammarg (Path of negative energy) later take rebirth in Patal as black cobras. Ancestors  with a benevolent temperament and engrossed in Divine tasks, after residing in pitrulok for some time later live in the Divine Naglok close to Shivalok, as yellow cobras.

4. As in the Kaliyug man has destroyed forests
where cobras reside, man has to face their menace

Till the commencement of the Kaliyug Deities had their independent places e.g. deity of a place, deity of a village, protector deity of the border etc. In the same way every village had forests with densely populated trees with snake holes at the base. All cobras from the village lived there. (These places are still found in Karnataka in Mulki, Suratkal etc.) As they were allotted their own space they did not trouble man instead protected him and his assets. In the scientific age for the sake of material development man destroyed these spots in villages and converted them into concrete jungles. That is why man has to face the wrath of the cobra.

In the State of Kerala due to destruction of such spots Hindu people residing there are troubled by snakebite, see cobras in dreams, have constant sickness in the family etc. is what a seeker told me some years ago.

5. History of Nagpanchami and ritualistic worship

5 A. Date as per Hindu lunar calendar of the battle with Kaliya (Kaliyamardan)

On Shravan Shukla paksha 5, Shrikrushna dived into River Yamuna at Gokul and fought and defeated the cobra Kaliya.

5 A 1. Concluding day of sarpayadnya

On this day on the command of Sage Astik King Janmejay stopped performing the sarpayadnya and Sage Astik gave refuge to all cobras in the universe.

5B 2. Benefits of the ritualistic worship

Ritualistic worship of nine nags gets rid of fear of snakes and the calamity of getting poisoned is overcome.’